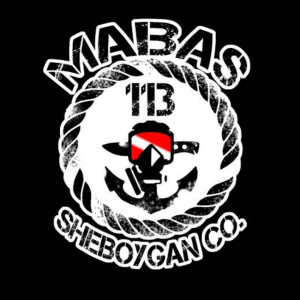 Beginning in 2014, the official name of the dive team will be The MABAS Division 113 Dive Team.  The change in name reflects the evolution of the team from a Law Enforcement based dive team to an inclusive team that is made up of Law Enforcement, Fire, EMS, and Corrections.  It also provides ownership of the team to the entire Sheboygan County public safety community.

Our mission is to promote water safety within the community, provide our departments with the capability of victim and property recovery, and perform searches for evidence as it relates to crimes. The ten members each have minimum certifications for PADI open and advanced open water, ice diver, dry suit diver, and dive rescue specialist I. In addition, members have training as med diver, underwater investigator, surface ice rescue, equipment specialist, dive rescue specialist II, visual cylinder inspector, and dive master. Annually the team schedules eighty hours of in-house training. This consists of a yearly skills review at the YMCA pool. Members must show proficiency in basic SCUBA skills as well as complete the International Association of Dive Rescue Specialists watermanship skill test. This is a timed test consisting of a 500yard swim, 800yard snorkel, 15minutes treading water, and a 100yard diver tow. Additional in-house training consists of ice diving, wreck diving and scenario based search pattern work in our local waters.

Our team works closely with the Sheboygan County Sheriff’s Department Boat Patrol and the United States Coast Guard Station Sheboygan. We are indebted to these two agencies for their assistance in providing us transportation and on-station support during Lake Michigan operations. All of our dives are in personally assigned dry suits with dry gloves, as well as Sea Pro QD BC and with Divator MK II full-face masks. In addition the team operates out of a 25ft cargo van with a 14ft inflatable Zodiac. All gear is stored in the dive van with tanks, buoyancy compensator devices, and regulators assembled. Members have their own designated section in the dive van with their additional gear organized for timely deployment